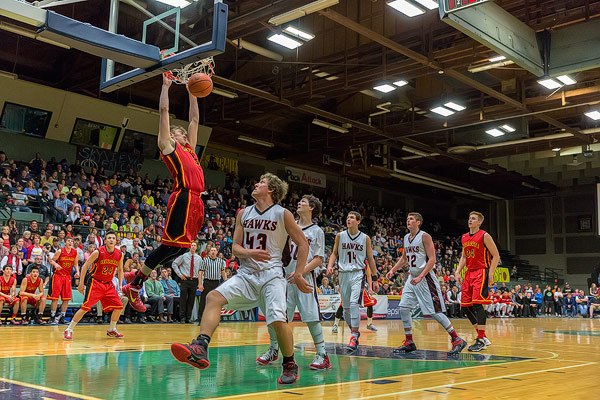 As you can imagine, shooting fast moving sports action in a dimly lit arena poses many challenges to come out with successful images. I’ve shot at the Montana high school state basketball tournament several times over the last 14 years. My first shoot at this event was in 2002. I used 800 speed print film and was fortunate that one of the few labs in the state that could actually “push” process print film was located in Bozeman near where the tournament was being held. This allowed me to shoot at 1600 ISO which translated to a barely workable shutter speed of 1/250th of second with my lens wide open at f4. 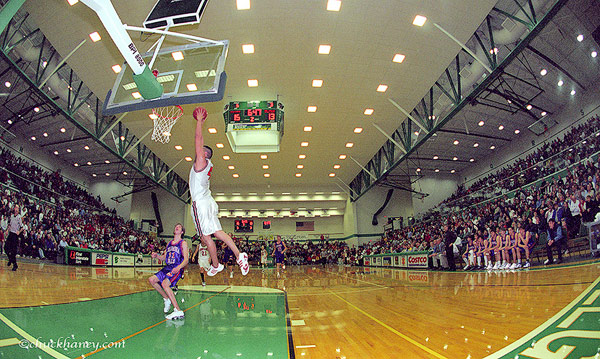 My next shoot at the event was in 2007. Now this time around, I was actually shooting with a digital camera, but pretty much the same parameters as the first foray as shooting over 1600 ISO would have introduced a lot of grain into the images. I experimented with using multiple flash units with varying degrees of success as you have to nail the shot with the one fire of the flash. 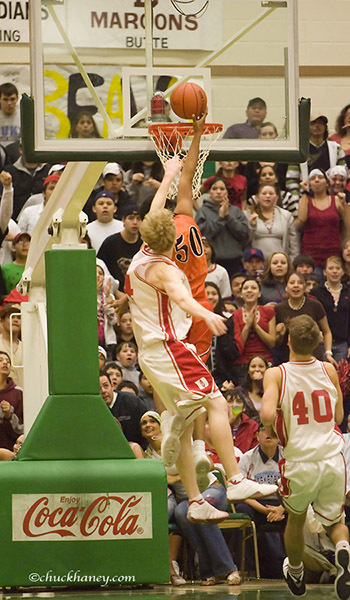 The biggest improvement in modern slr camera’s are the ability to shoot with higher ISO with completely acceptable results. With my Canon 5D MarkIII and ID Mark IV I was ready to push the envelope this time around and shoot at ISO 4000 and even 5000. Also, I came equipped with fast 2.8L lenses. Having an additional stop from f4 to 2.8 might not sound like a big deal, but it is. Having an extra shutter stop of speed made all the difference. Ideally in sports shooting (or with moving birds,wildlife) to stop or freeze the action you would want at least 1/500th of a second or more. I also did not want to use remote flashes for the event and I did not see any of the other newspaper photographers use flash either.

As you can surmise, using a fast shutter speed with lens wide open means an awfully shallow depth of field focus. The main thing is to keenly follow the action with the autofocus in tracking mode. Sure enough if you put the camera down for a play something dramatic will happen. I used my 24-70 2.8L for plays on my end of the court and switched to the 70-200 2.8L for action on the other end of the court. It helped that I focused on one player in general as star player, Tres Tinkle, of Missoula Hellgate provided most of the highlight plays and was the focus of my blog entry for The Last Best Plates article that I was writing.

Lastly being the photo perfectionist that I am; I used Imagenomic software in Photoshop to remove any excess grain from the final images. I am pleased with the results and hope to shoot more of these low light activities in the future. As Canon introduces it’s next generation of cameras, 5DS R this summer it will be fun testing out the ever expanding world of shooting comfortably at high ISO and capturing the world as never before!