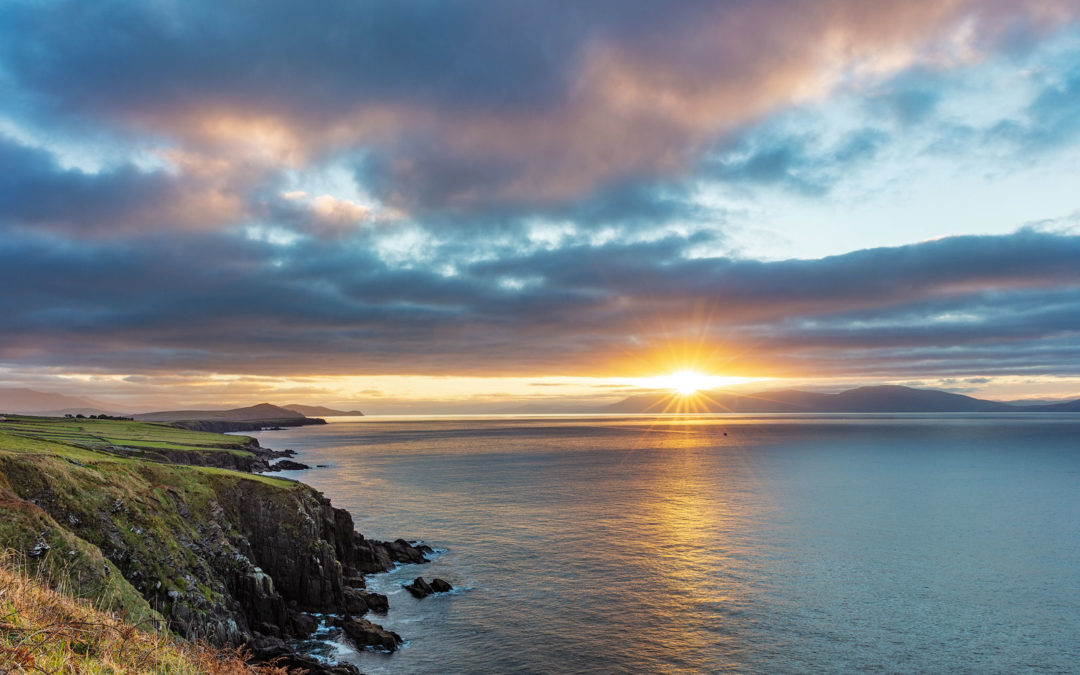 It seems that the vision of somewhere you have not traveled to yet is wedged somewhere between the actual reality of the place and the fantasy concocted in your mind.  On my first ever visit to Ireland, I did not see any lephracauns or blarney stones residing beside thatch roofed houses. However, I did see a vibrant and friendly culture and a landscape just as saturated in shades of green as I had imagined. I came to Ireland with open eyes and attitude; I was eager to see the sights and get to know the local spirit over a pint of Guinness and Irish folk music.

I will be hosting an all-inclusive 10-day photo workshop at the end of September 2019. I have several spots still open and hope that you can join us. Click here for a link to my website page with all of the details. 2019 Ireland Photography Workshop

You can sign up to receive my monthly newsletter which contains the latest images, news and photo tips from Chuck. Sign up here. 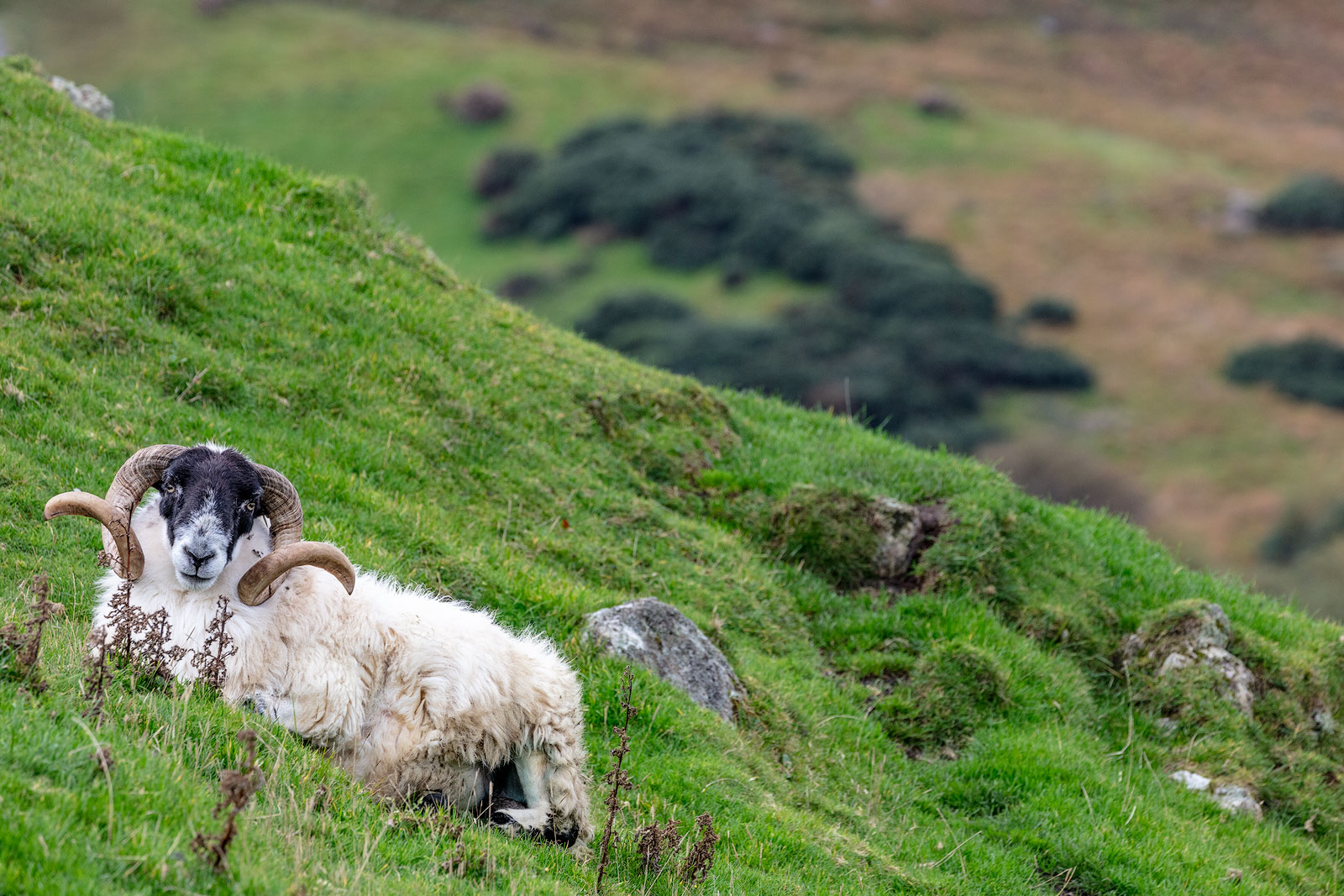 My wife Jarmila and I began our journey in Dublin. I prefer rural landscapes, so I wasn’t quite sure that I would enjoy spending three full days in Ireland’s largest city. I was wrong. I was thrilled with the commanding views from the front seat/top of double decker buses that whisked us from our lodging near the airport to the city center. Downtown was a bustling scene filled with many fine restaurants and a dizzying array of shops and bars that kept us busy on our walks.  Dublin proved to be a photographers delight, especially along the River Liffey at dusk, where there were ideal shooting locations all along a riverfront that highlighted the historic and artsy looking bridges that span it. Our timing was really great in October as there were numerous concerts and shows at the 3Arena. We even ran into comedian, Dave Chapelle, as we walked near the arena before his show with John Stewart, which we ended up attending. Nice guy Dave! Later that week ELO, Steve Miller, Counting Crows, John Fogerty and more played. We ended our trip with an amazing evening with Van Morrsion and Robert Plant! It was refreshing that almost everyone who attended the shows came on foot or used public transportation and beer/ liquor was priced as reasonably as the neighboring pubs. Nice not to get gouged for a pint of beer like here in the states. 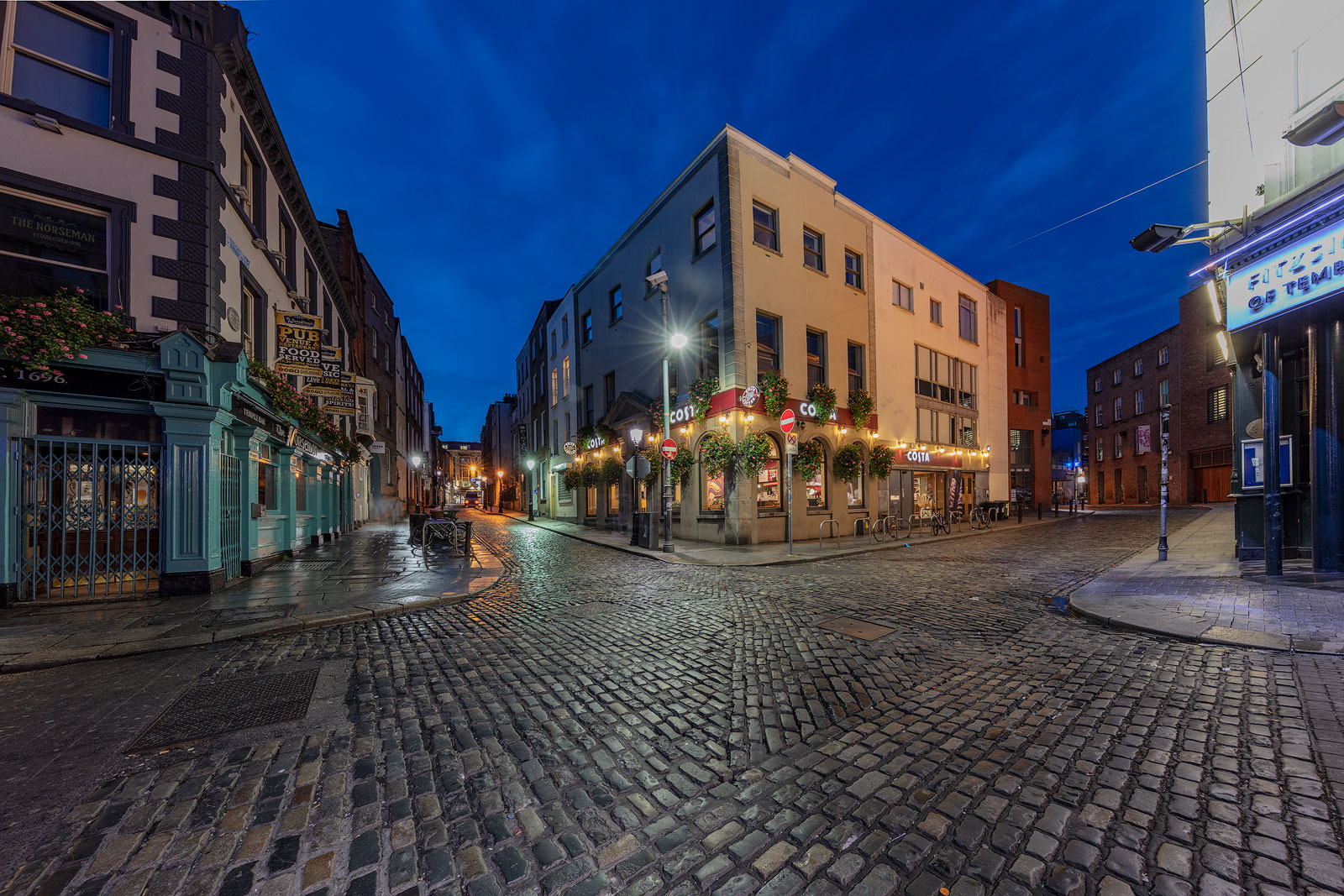 The Temple Bar District was another area of Dublin that was very cool to photograph. I found that going early in the morning at dawn was the best time to shoot the historic cobblestone streets. It was just too crazy busy in the early evening to get decent shots without throngs of people walking in front of the tripod. A really cool thing that we participated in was taking a local food tour. We sampled traditional Irish fare in 3 different eateries and even learned how to make a proper Irish coffee. 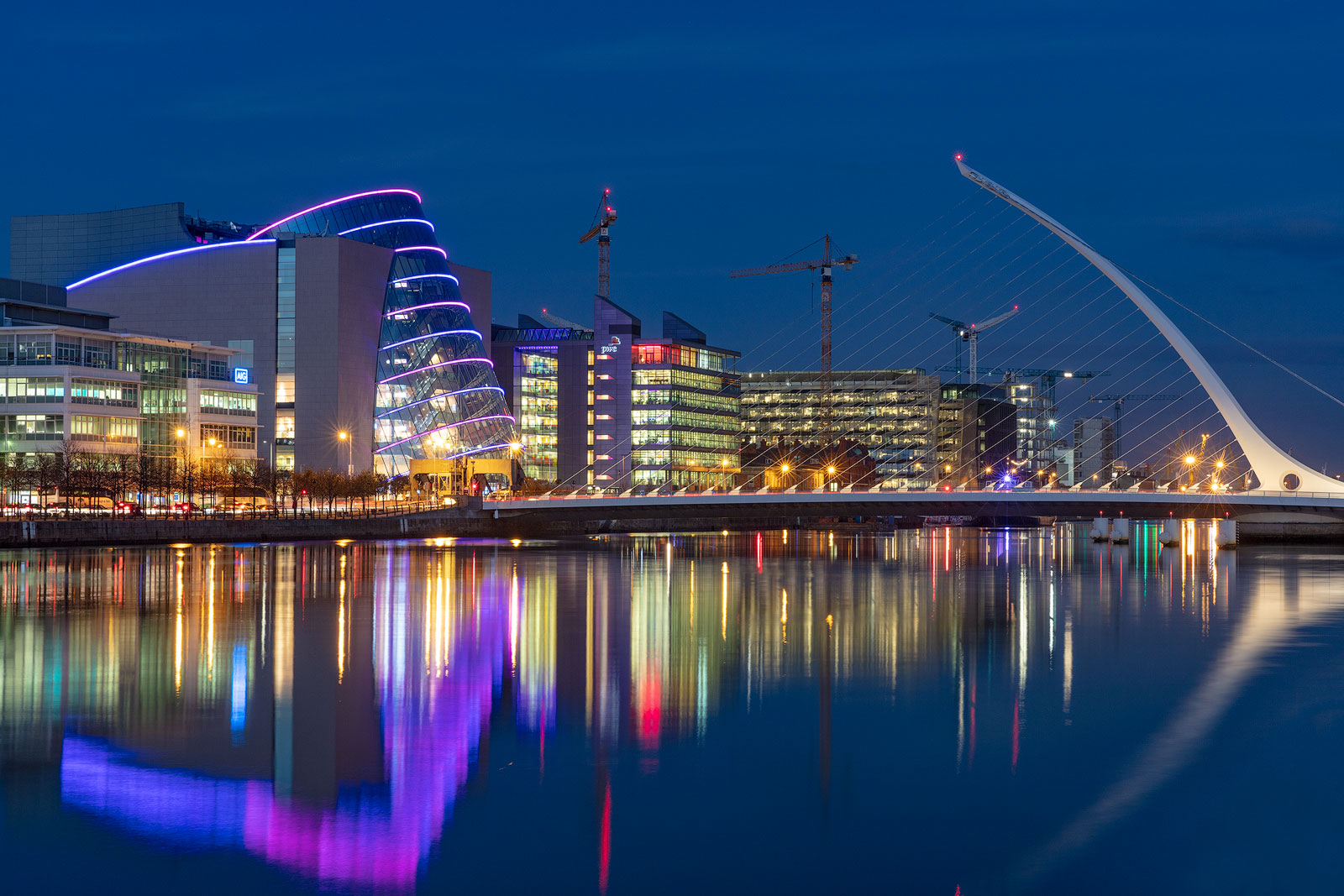 Samuel Beckett bridge at dusk over the River Liffey in downtown Dublin, Ireland

We decided to make our way to Northern Ireland for a few days. This meant that I had to drive the narrow Irish roadways on the left side of the road. The disorienting reversal of driving habits combined with numerous roundabouts seemed a bit daunting at first. I was actually glad to have a few days on public transportation in Dublin to observe and get somewhat oriented before picking up our rental car. Car insurance is really expensive in Ireland. I got the full insurance as I didn’t want to have additional stress worrying about a fender bender. I imagine there has been a fair amount of tourists who haven’t fared so well, hence the added expense. Fuel was also twice as expensive as it the U.S., though our diesel Skoda got around 50 miles to the gallon, which evened out higher cost at the pump. The first day driving, a little too zealous to explore, I exited the main road in search of more rural landscapes. As a result, we were stuck on a super winding and narrow roadway (thanks gps!!) where road shoulders were abrupt hedges or stone pasture fences; in other words, absolutely no room for daydreaming behind the wheel. Day one of driving Irish roads was rather, well, sphincter tightening! Glad to report that each day got progressively more settled down and comfortable and after a few days I felt at ease and was even wishing we had rented a sports car with great handling. 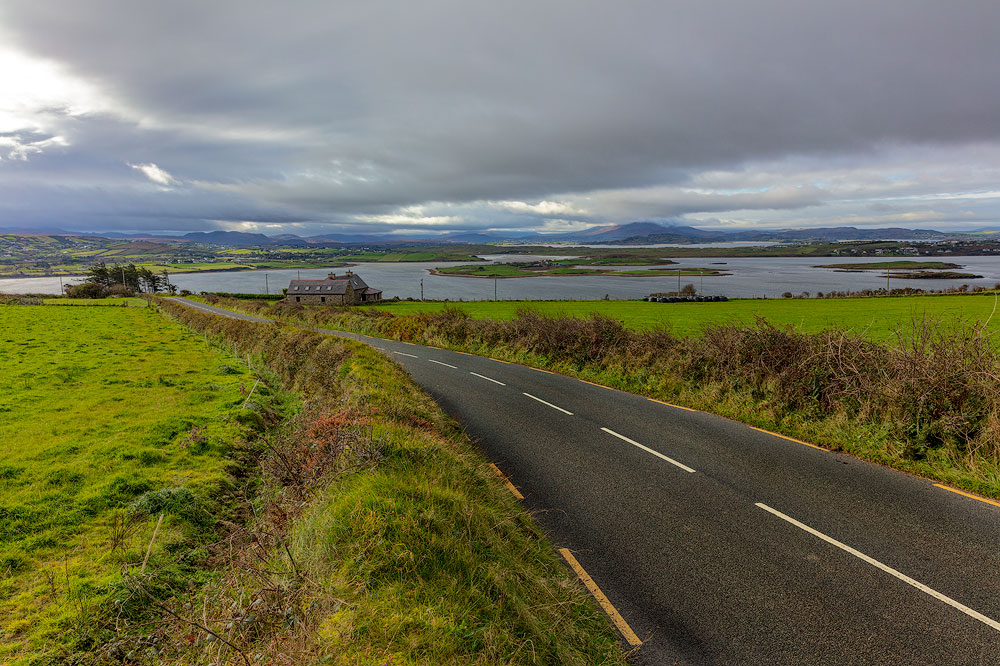 In Northern Ireland, we based in Londonderry. We visited the Giant’s Causeway and The Dark Hedges on one morning. You want to arrive at The Dark Hedges early in the morning before other folks start walking along the path between the intertwined beech trees. I encountered a group of Italian photographers at the opposite end of the road. It didn’t take long to realize and understand that we needed to shoot together so that we had a clear path of road and trees only in front of our lenses. Overcast conditions worked well and if there was fog coinciding with the sunrise it could be magical to shoot this location as well. 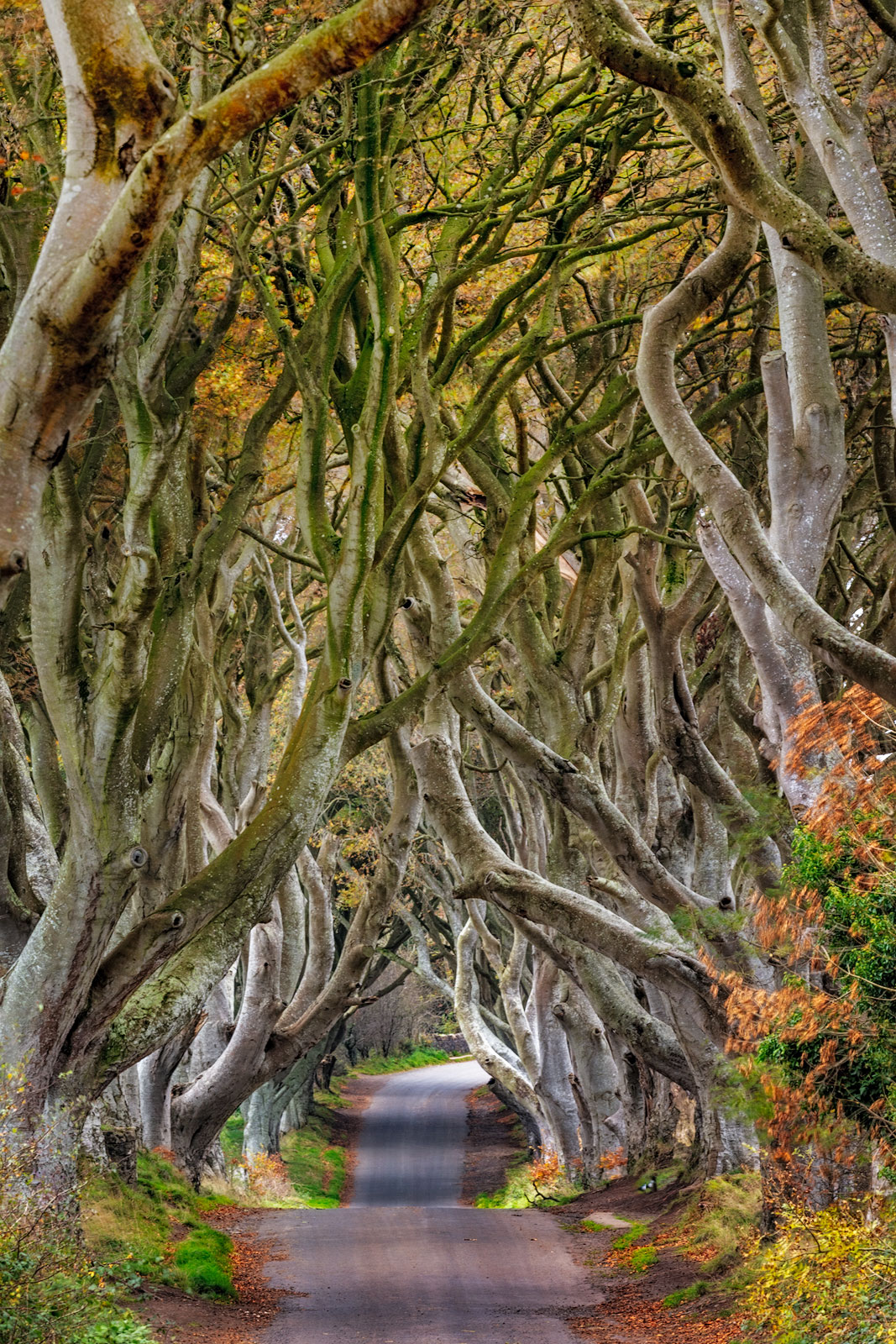 Giant’s Causeway is best shot near sunset when the light is ideal and crowds thinned out. We arrived at midday and it was extremely full of tourists, some who were not too keen, IMO, at watching the incoming waves as they were often precariously close to getting swept into the North Atlantic Ocean. I had to use patience to wait until the formations were clear of people to get good landscape images. We’ll be staying right next to this location on my workshop, so sunrise and sunset shots are an option. 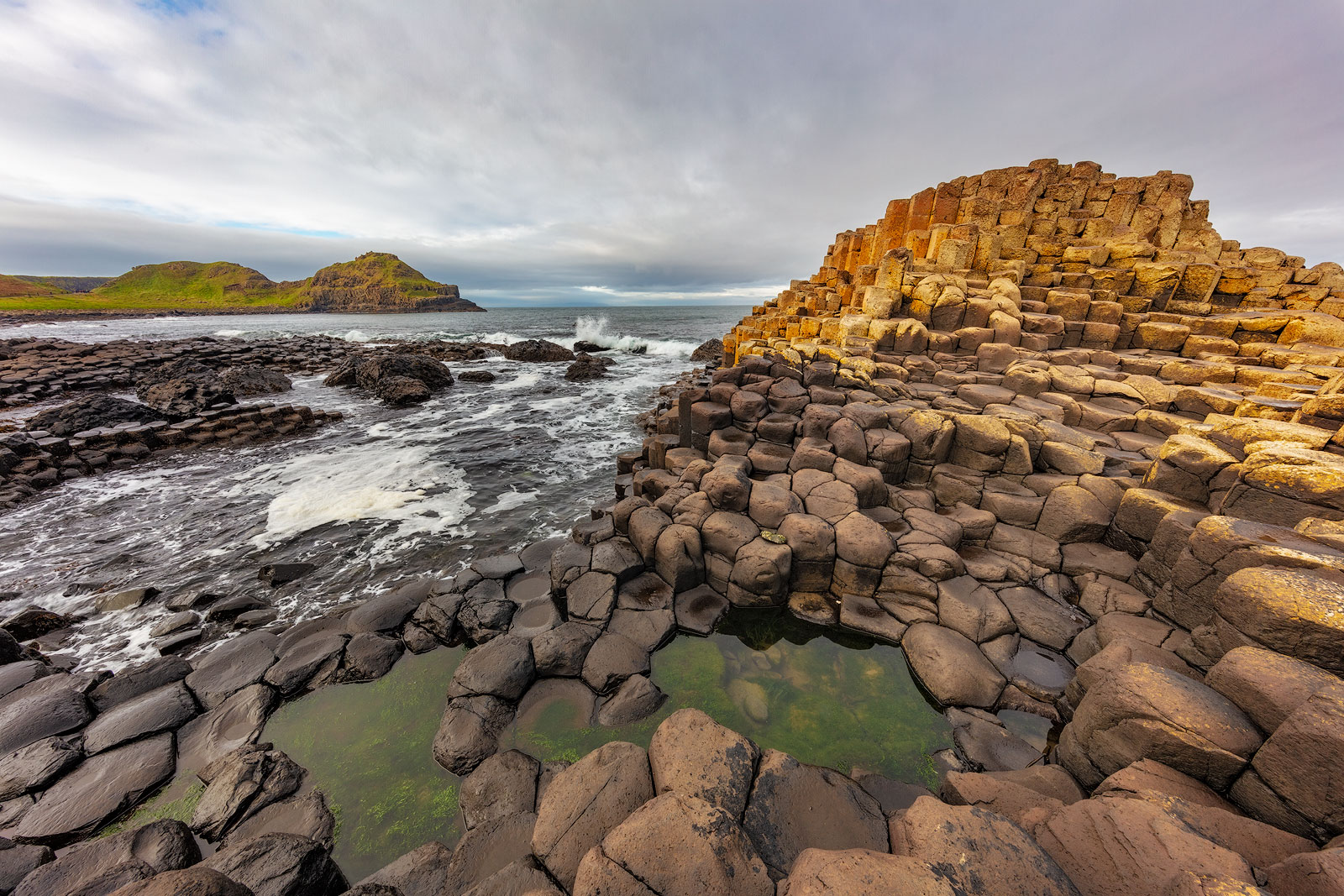 Basalt at the Giant’s Causeway in County Antrim, Northern Ireland

For the rest of our Ireland experience we spent on or near the western coast. In the north, County Donegal was quite stunning with the Fanad Head Lighthouse being the main attraction. We could have wandered slowly along the rural countryside for several days. 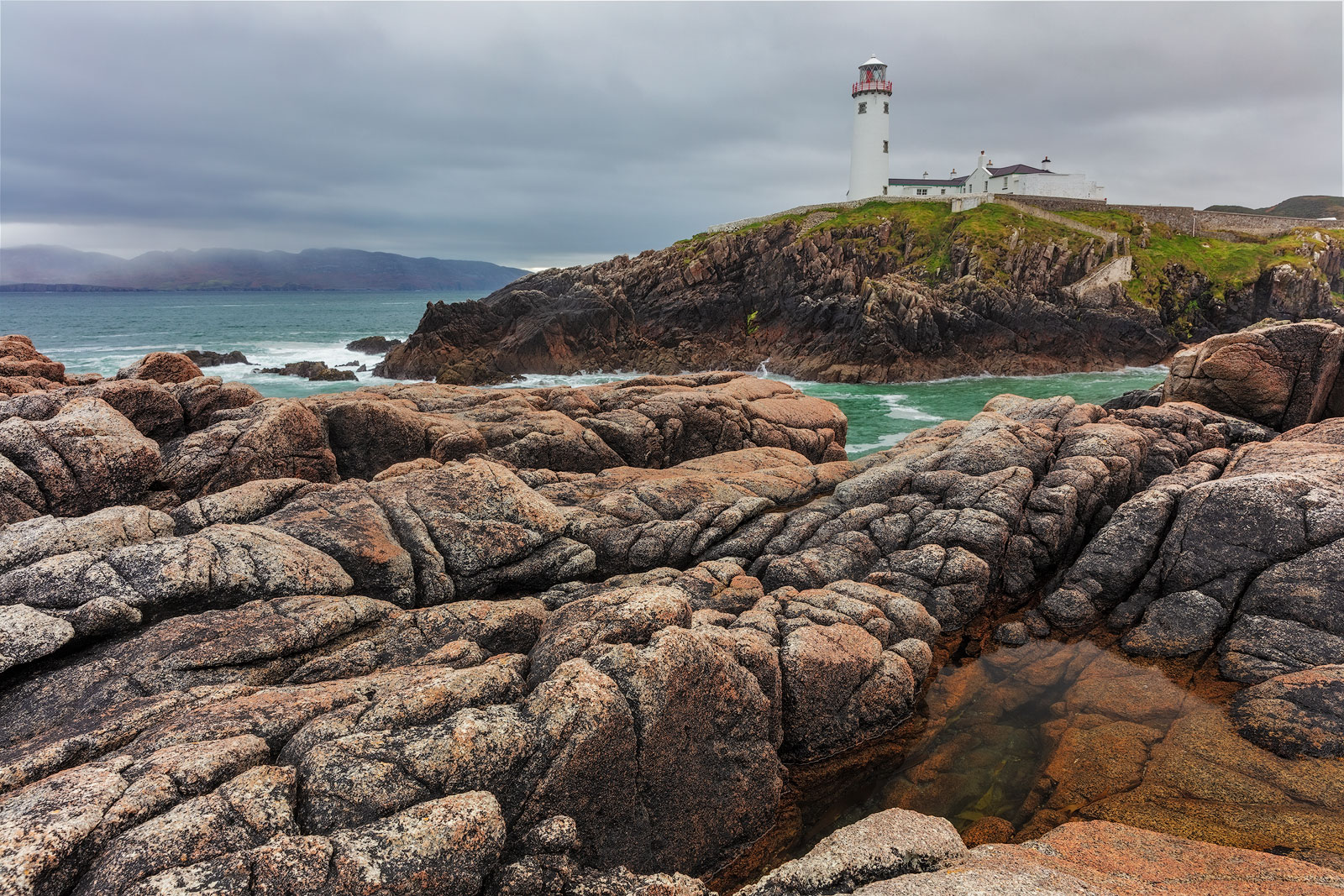 The last leg of our trip was the southwest portion of Ireland. We explored the vibrant downtown area in Galway and the famed Cliffs of Moher, then spent three lovely evenings in Killarney where we enjoyed meeting the locals over a pint of Guinness and checking out Killarney National Park. My favorite spot in this region was the Dingle Peninsula. Much like the County Donegal, it had a rural and rugged feel to its coastline and hills. I would love to come back next year and rent a road bicycle to pedal Slea Head Drive and then climb up to Conor Pass with its tremendous 360 degree view. 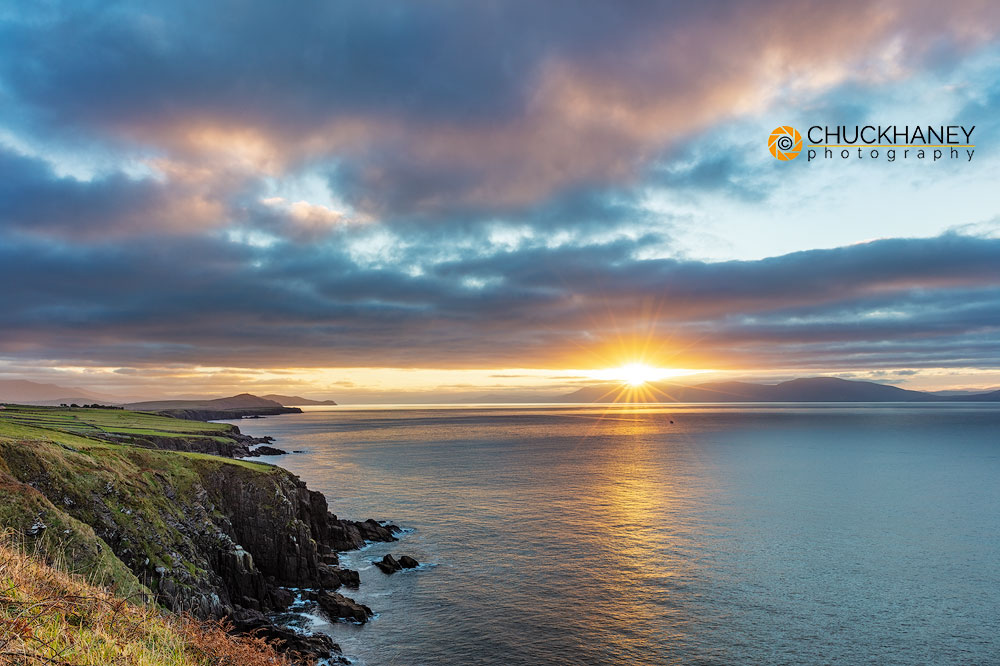 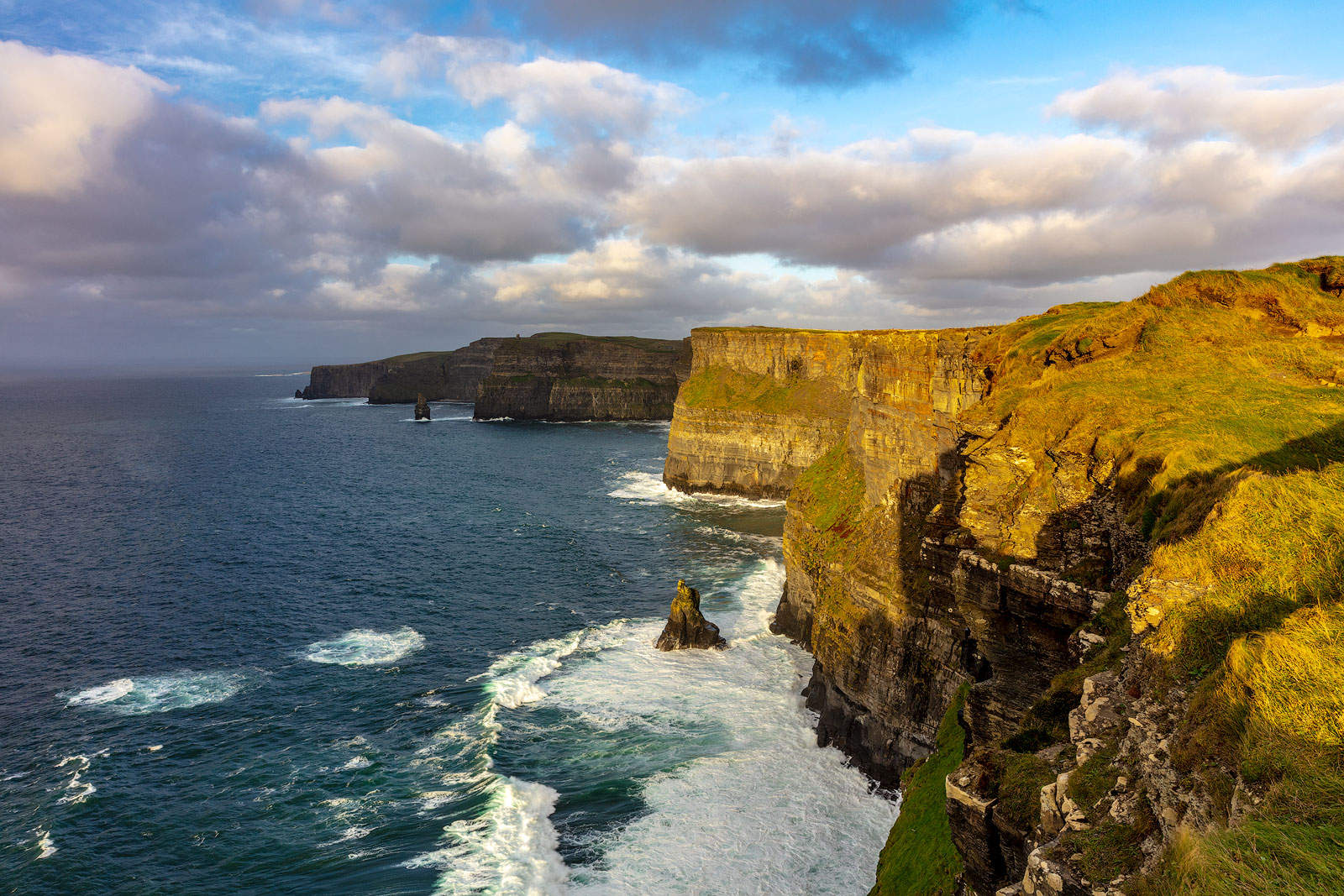 The Cliffs of Moher in County Clare Ireland 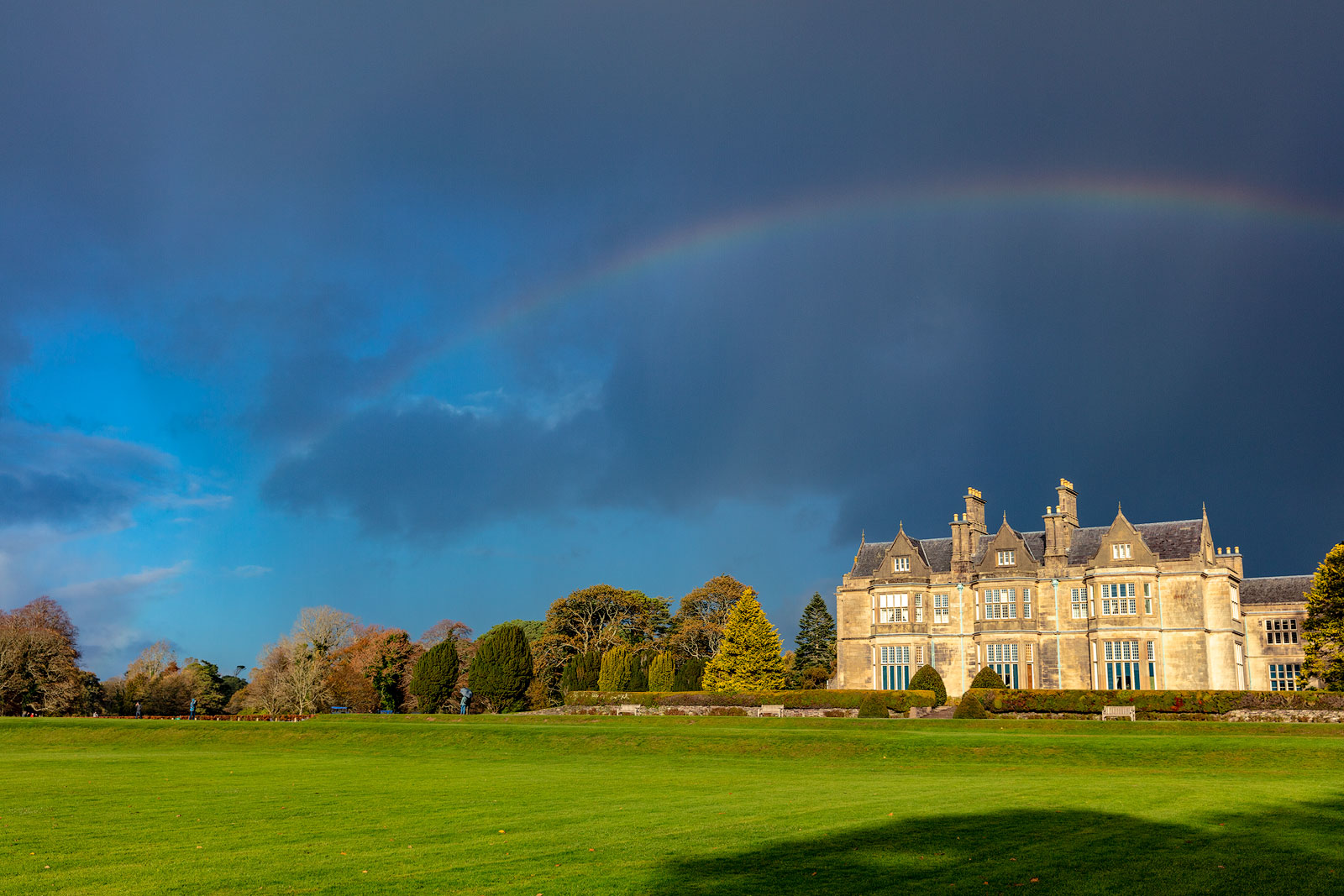 Rainbow over The Muckross House in Killarney National Park, Ireland

To see more of my Irish portfolio check out my searchable stock site on Photo Shelter.