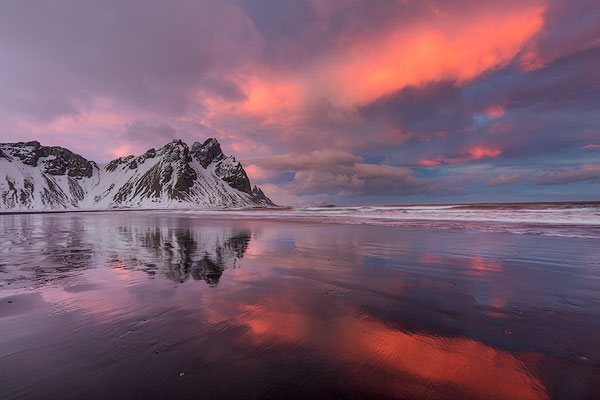 Traveling to Iceland has long been a dream of mine. As my wife, Jarmila, instilled in me, this winter seemed to the perfect time to explore the fascinating landscapes of this North Atlantic island. I researched locations and the logistics before departing Montana. Here is what I have learned about the country and my photographic experience there.

The south coast sites that I visited definitely lived up to my expectations. In short, the dramatic landscapes are mind-blowing which made the photographic experience spectacular! A big reason why photographers are so drawn to this land are the weather extremes that produce magical looking skies often. The weather was changing all the time resulting in great clouds and memorable sunrise and sunset light. During the eight hours of February sunlight, the sun never rose very high in the sky meaning the shooting conditions were favorable almost all of the day. The landscapes were awesome in all of the locations, but my favored area was the rural southeastern part of the country where the massive Vatnajakull Glacier spread forth tongues of ice that spilled down towards the coast between jagged snow-capped mountains. It looked like Lord of the Rings country! The variety of subjects to shoot in winter were very rewarding. There were many herds of Icelandic horses, seascapes with alluring black sand beaches and crashing waves, icebergs, ice caves, numerous waterfalls, quaint fishing harbors and stunning mountains like Vestrahron that abutted the North Atlantic ocean.

Other fun facts about Iceland.

Certain items were more expensive than in the U.S. Gasoline was around $7 per gallon and food and alcohol was relatively pricey. Lodging was actually very affordable as well the flight on Icelandair. The drinking water is the best that I have ever tasted and the people of Iceland are the friendliest folks of all my travels. Though the weather had wild swings, it really never got that cold as the temperatures hovered around the freezing mark most of the time. Sunny, calm and most pleasant one minute followed by rain, hail or snow a minute later. The country is aptly named: there was ice present everywhere and care must be taken when walking among the many tourist spots. I would suggest crampon-type grippers if you are worried about footing. Tourism is on the upswing here, there were many tourists at all of the popular spots. Thought, the further east that we traveled from Reykjavik there were significantly less people, both locals and tourists.

My first foray off of the North American continent was epic and so enjoyable. It has whetted my appetite for more international travel. It was refreshing to see the world from a different perspective and culture. My only real disappointment was not seeing the northern lights, just bad luck as to where and when we were there. Next winter during the workshop! 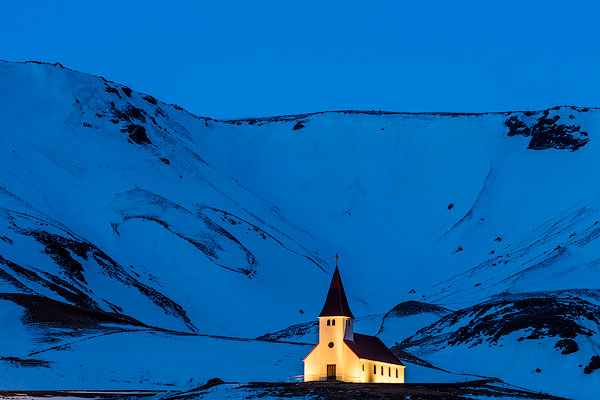 Vik i Myrda church lit up at dusk in Vik, Iceland 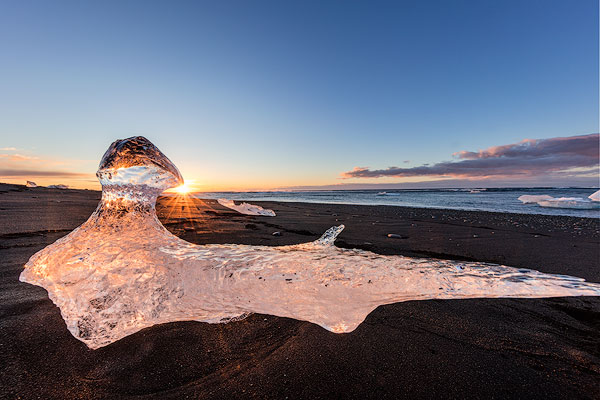 I made my annual late winter pilgrimage to a southwestern desert, this time the Sonoran near Tucson. I conducted my first workshop of the season in the warmth of the southern Arizona desert which was, needless to say, quite a contrast to Iceland. No more need to worry about slipping on the ice, just avoiding flesh piercing cacti thorns. The conditions were a bit challenging for landscape work as there were near record high temperatures combined with high clouds which often muted the early and late light. I found a wide variety of subject matter to shoot in addition to the giant saguaro cactus landscapes. Cityscapes of the city of Tucson including a wonderful evening spent exploring spanish-style vintage doorways in the Barrio Viejo district were fun. The interior of the church at Mission San Xavier was quite fascinating and inspiring with exquisite hand-crafted detailed work that featured bold colors. The Arizona Sonora Desert Museum is a must stop for photographers with plentiful desert gardens, wildlife exhibits, hummingbirds and raptors in flight. The second part of the trip was at the remote setting of Organ Pipe National Monument. You could practically see Mexico from the park. It reminded me a lot of Big Bend National Park in Texas. The best locations were along the Ajo Mountain drive late in the afternoon where the signature species, the organ pipe cactus was prominently featured against the reddish tones of the mountain range peaks. I also worked on new cycling images for my continuing series on bicycling in national parks that I am writing for Adventure Cyclist Magazine.

New images from the southern Arizona. 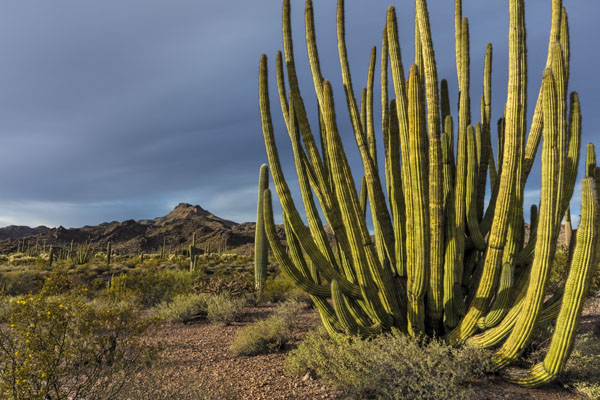 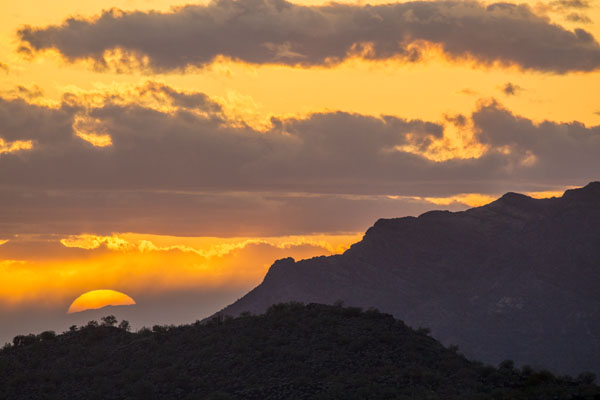 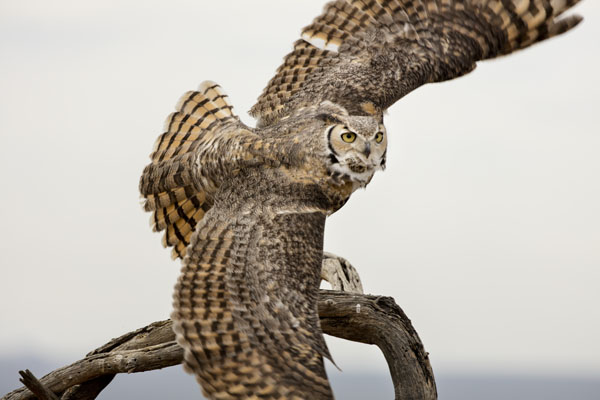 This is a lens that I had been curious about for quite some time. I recently did several interior architectural shoots that spurred me to finally make the plunge into a tilt-shift lens. There are several distinct advantages to using one of these lenses (Canon also makes them in 17, 45 and 90mm focal lengths). 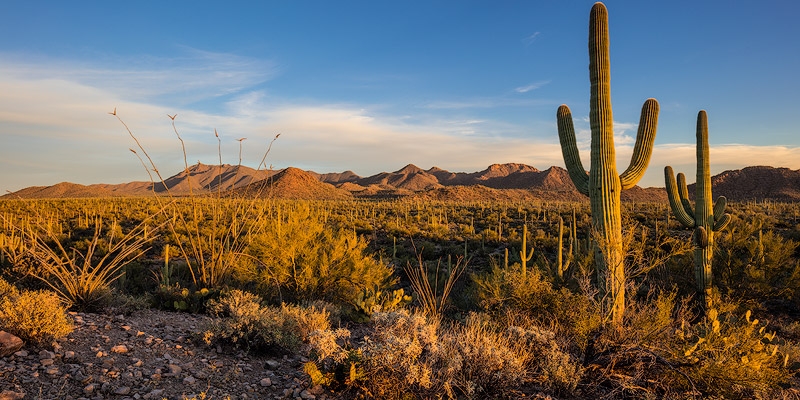 Often when shooting subjects like tall buildings, for example, one must point the camera body up at an angle to get the top of the building in the frame and this produces buildings that look like they are going to fall over. Wonky looking lines that are not straight just do not cut it for architectural or certain landscape shots (like forest shots). With the TS lens you can keep camera body parallel (flat) to the subject and simple “shift” the lens up and this keeps the lines straight. Another plus is the ability to shift the lens across the plane and produce three to five shots that make a superior quality panoramic image. Using the tilt function can create more depth of field without resorting to shooting at, say f16. You can shoot f 5.6-8 and still get everything in focus which is a big help especially when shooting a field of wildflowers on a windy day. You can also create the opposite effect by throwing the background completely out of focus which works great for portraits of people of flowers closeups. The lens is manual focus only. There is a very good tutorial by Canon on youtube that explains these concepts vey well. https://www.youtube.com/watch?v=rEcmD87sb1w

In the meantime, I will be shooting more with this creative lens and reporting the results in future newsletters.

I’ll be doing a quick Montana “roadie” to show my wife, Jarmila, that Montana has more to offer than just Whitefish. Missoula, Butte, Bozeman, Great Falls and the migrating birds at Freezeout Lake are on our tour agenda. Before you know it, the second workshop of the year will be upon us. Seattle and the tulip festival promise to make for an exciting week of cityscapes and flower shots. It will be great to update my Seattle city files as cityscapes become dated much quicker than landscapes.